Sounds gross, right? Loins. Just the word sounds slimy and unappealing. It’s a really old school phrase that basically means to get your tunic (men) pulled up and out of the way to prepare for a fight. I’m going to compare it to the phrase (ladies) to “Put your big girl panties on.” Roll up your sleeves, crack your knuckles, grit your teeth, and get ready to stand your ground. Take on the day. Take on the problem. Get ready to fight.

And when it comes to these kind of fights, I think these things are important to remember:

And just for fun, here’s an illustration of how to literally gird up your loins. It’s a good thing guys now have Hanes. This looks complicated. 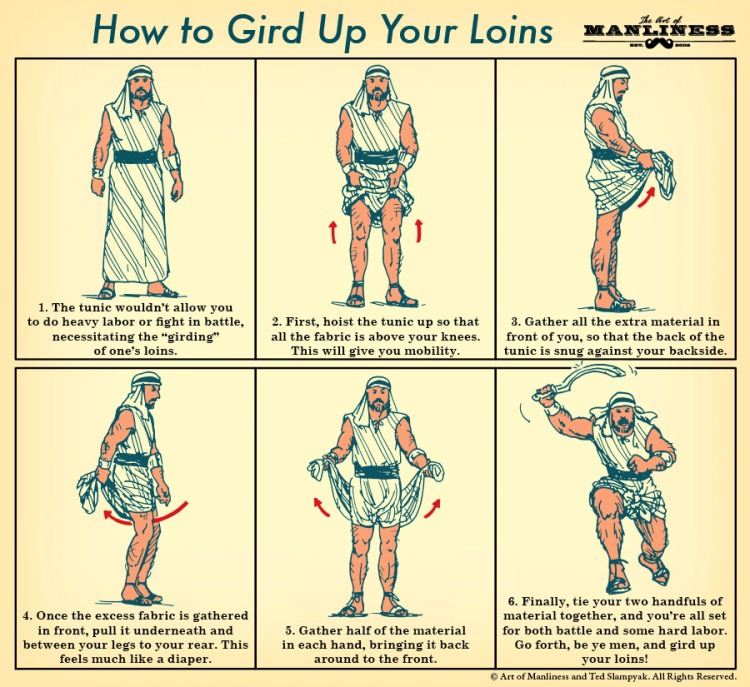 This will embarrass Phillip. Maybe. Whatever.

I’m not a big PDA (public display of affection) type person. And I don’t really gush over Phillip the way I maybe should around other people. I think it probably makes people uncomfortable.

But I just have to say that our life these days is incredibly stressful. And sometimes the only thing that clears my head and calms me down is burying my face in my husband’s neck and breathing him in. He takes my chaos away, at least for a little while. I don’t know how I would function without that man.

Phillip and I are taking a marriage class at our church. Do you want to know why we’re taking that class? Honestly? Because it has free childcare. Because we totally think we’ve got this marriage thing figured out. But we really don’t, probably. But we think we do. Anyway, in the class tonight the topic of being in gridlock about a subject came up. We didn’t talk about it long, but it got me to thinking about the only real gridlock I can recall Phillip and I being in. And I’m not talking about little things, like a movie that I really wanted to see and he didn’t or anything like that. I’m talking about a real big thing that we both were dead set not going to budge on. A thing that really caused a rift that we couldn’t seem to get past.

If you’ve been following my blog for some time, then you may remember this post on my previous blog.

When was this written? August. Just three months before we learned about the girls. And what that post doesn’t really say is that there was really some serious tension between Phillip and myself on this subject. I desperately wanted to adopt again. I didn’t feel our family was complete. I cried myself to sleep many nights because of it. I didn’t feel like he was listening to my feelings and he had said his peace and didn’t feel that I was respecting his decision. He had good, logical, sound reasons not to adopt anymore children. And I had lofty, naive, emotional reasons why we should.

And for the most part we were fine. But I was bitter. I really was. And I was letting it affect our relationship. I was cold at times and just down right mean. I felt like I had already been ripped off by nature or God or whatever because I couldn’t bear anymore children. And I felt like Phillip was just pouring salt on the wound by not indulging my desire to adopt again. I think we were both willing to let this disagreement come between us, especially me. But we were both not going to budge on the subject. I felt he was being intensive and he (rightly so) thought I was absolutely nuts. And I was honestly beginning to worry about the future of our marriage. I wasn’t thinking divorce or anything that drastic. I was just thinking that we would have this unsettled matter between us for the rest of our marriage. That I would be a little old lady still mad at him because he wouldn’t let me adopt another child. And as much as we really didn’t want there to be bitterness in our marriage, I wasn’t willing to budge and neither was he.

And we would still probably be there today if not for the call on November 10th. Because if there was any possible scenario that would cause Phillip to budge on the issue of adopting again, it was the very scenario we were faced with that day.

Mikey, the boy we adore more than life itself, the child who has brought us more joy and healing than we could have imaged, has two sister. Two sisters.

And I, being the crazy person that I am, was ready to take them in on the spot without knowing a single thing about them. They could have had three heads for all I cared. Phillip, being the more grounded, reasonable person, still wasn’t convinced that it was the right thing to do.

Until he met them.

And until I met them.

He knew that once I saw those girls that I would be broken down to my core if we didn’t adopt them. He knew that if he said “no” I would probably never forgive him. And right or wrong, he was right. I don’t think I could have ever recovered from that. Because, remember, I wanted another child. I had prayed desperately that God would change one of our hearts. I had begged God to make a way for us to adopt again. And he had answered my prayer. I was the victor!

But this is the thing. I had a very naive, storybook ideal of how it would be. We would instantly fall in love. Head over heals in love. Phillip, again, being the reasonable one, knew it was be very difficult. The most difficult thing we would ever do. He approached the whole situation with much more caution and fear. I was sort of afraid, but mostly just excited.

And then we got them.

And for the first couple of weeks things were really pretty good. And then the honeymoon phase ended. Real personalities started to emerge. The reality of our new life began to soak in. And the storybook ideal that I had imaged began to crumble. Because it was really hard. I didn’t instantly fall in love with the girls like I thought I would. And neither did Phillip. They didn’t feel like mine right away. It honestly felt like they were intruders. And I know they’re just little kids and that sounds harsh, but that’s how it felt nonetheless.

And I was just so taken aback by this. I desperately wanted more children. I had prayed for these kids long before I knew they existed. I longed for them, genuinely. I was expecting the business. I was expecting the insanity and the extra laundry. I really wasn’t caught off guard by that stuff. But I didn’t know they wouldn’t fee like mine right away. I didn’t know that I would have a hard time falling in love with them. Nobody told me that. And even if they had, I wouldn’t have listened.

And I think for a time we both began to question if this was indeed the right thing. Because if this is what we were supposed to do, then wouldn’t it just feel right? What I didn’t know at the time is that it is very typical for adoptive parents to feel this way, especially if they’re adopting a child that’s a bit older like Brittany was.

We’ve now had the girls for about 4 months. And things pretty much feel normal now. I can honestly say that I love these girls. Do I feel exactly the same way about them as I do the boys? Not yet. If you’re a parent you know the feeling of being completely intertwined with your child. That child is part of your soul, just an extension of your own body. The feelings for your child go far beyond love. Much of my identity is wrapped up in being the boys’ mom. I don’t feel those deep, connected feelings toward the girls yet. But I do love them. And they love me. They have completely accepted me and Phillip as their parents.

So I write all this just to say a few things. First of all, God does still answer the prayers of his people. He hears us when we pray at night and cry into our pillows. He hears our dreams that seem so lofty we can hardly believe them ourselves. He may not always answer the way you hope, but he hears. And even if God does give us what we’ve prayed for, that doesn’t mean it’s going to be all roses. Any kind of significant change in our regular lives are going to present more challenges than we thought they would.

But I also want to come back to the gridlock thing. Phillip and I are very good friends. I love him dearly. I would never want to hurt him and he would never want to hurt me. But when we were in this place of disagreement, we were hurting each other whether it was intentional or unintentional. We were both wrong. We both wanted to control our future based on somewhat selfish desires. When all the while, God already had the whole thing figured out. And he put in place a plan that was bigger than either one of us. Don’t let your marriage suffer because of a disagreement that is bigger than you. Really, just adore your husband or wife and know that God already has it all figured out.

And even thought it is still hard and we still have some bad days, I know that these girls are right where they are supposed to be. As I cried at night back in August for God to hear my prayer, he already knew the children that I was crying for.

And the gridlock is no more.

This may gross some of you out. Or you might puke a little in your mouth after reading this or something along those lines. I don’t care. Seriously, I don’t.

My favorite part of the day has always been after the kids go to bed and Phillip and I have an hour or two to just relax and talk or watch t.v. together. I’m not talking about making out like teenagers, although if we weren’t so stinking tired all the time we just might. It’s nice to just…be…just exist together without all the interruptions that are present when the kids are awake.

Now that we have four kids this time for us is so much more valuable. I just love resting next to him or laying on his chest and watching some garbage on t.v. Just that hour or two in the evening after the kids go to bed is enough to take away the stress of the day. I just can’t imagine my life without him. And now, especially since we have two more kids, I just need Phillip more than ever. I’ve been telling him a lot lately that he better not dare leave me with all these stinkin’ kids.

And it’s almost that time. My favorite part of the day. I can already feel some of the tension melting away.

There was an error retrieving images from Instagram. An attempt will be remade in a few minutes.